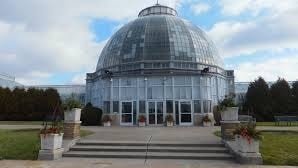 Our latest in the Westbury's Picks series

Built on the centre of the Belle Isle island, the Anna Scripps Whitcomb conservatory is a fantastic structure, housing a myriad of plants from all over the world.

Designed by Albert Kahn, who turned to Thomas Jefferson’s ‘Monticello’ for inspiration, the conservatory covers about an acre and features a north wing and a south wing and a 100,600 cubic feet, 85 feet high dome.

The huge building has five different areas, each home to a different climate. The dome houses soaring palms and other tropical plants, whilst the north wing houses hundreds of cacti and desert plants and the south is home to hundreds of tropical plants and the Children’s Christian Temperance Fountain. Other zones include the perennial gardens and displays of annuals, and the ‘show house’ features a continuous display of blooming plants.

The conservatory opened in 1904, and during the mid-1920s was averaging 1.5 million visitors each year. When originally built, the conservatory had a beautiful classic wooden frame. However in 1953, this was replaced by aluminium which is more hard-wearing. In April 1955, Anna Scripps Whitcomb – daughter of Detroit News founder James E. Scripps, bequeathed her huge collection of orchids to the conservatory. This meant that the City of Detroit then had the largest municipally owned orchid collection in the country. Many of these exotic orchids were saved from Britain during World War II, and the conservatory was renamed in her honor in gratitude.

This beautiful building is an amazing structure, and home to hundreds of exotic plants. As a feat of great engineering, beautiful design and dedication to plant life from over the world, this inspiring building is this weeks Westbury’s Pick.