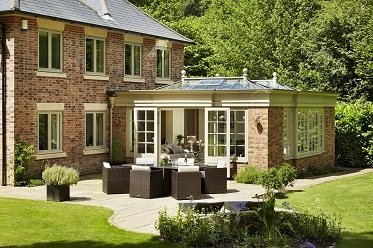 From time to time we ask our customers to write for our blog. Here’s Mrs M on how her family’s new orangery has made a difference to their home.

Our home is a new build property constructed in 2010. Whilst built to a high standard and high finish, from the outside, it was not the most attractive or interesting. Inside, we loved our property but from the outside it felt very much like a boring square building without much of interest. Because of this we had always planned to extend even when we bought it; we felt it would add both to the exterior look of the house and to the way we use the house as a family. 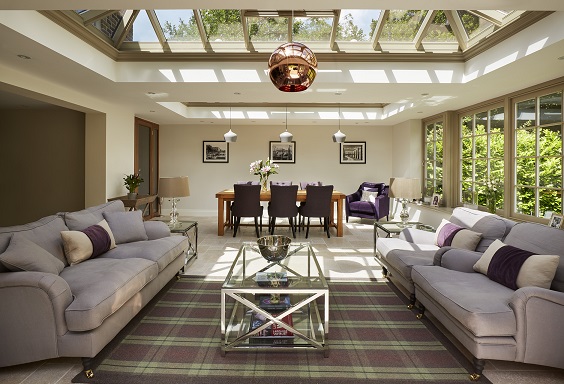 As an aside during this initial conversation, I spoke to Jonathan about how my husband has always had an interest in wine. He and I always talked about how nice it would be to have a room where we could store wine and where my husband could pursue this as a hobby. Therefore we had hoped to make wine a feature in the build and had envisaged that this would be part of the orangery, perhaps in the form of a wall of wine along one of the orangery walls, but we weren’t really sure of how it would look or work in reality. However, within five minutes Jonathan saw the potential to create a slightly larger extension to allow us to install a separate wine room within the new space.

It was this alternative point of view that was invaluable; he helped us to think outside the box and the wine room became an integral and exciting part of the build for us.

Once we had decided to follow this route, we spent a lot of time looking at images of different wine rooms to get an idea of what we wanted and then liaised with Westbury to come up with the final design. After we had signed off, an independent carpenter recommended by Westbury created the bespoke cupboards, racks and worktops. 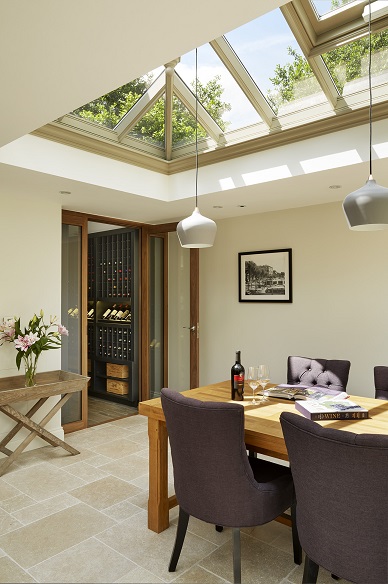 Although not a vast room at approximately 3m x 2m, the wine store can hold up to 500 bottles, is big enough to fit two people inside, and includes a wine fridge and sink so we can wash up glasses easily. It’s also perfectly situated along the exterior wall to the right of the house and next to the dining area so it is easily accessible when we’re entertaining. We have had comments from friends saying that they love it but what we also like is that, whilst it’s visible from the room, it’s also subtle. We weren’t aiming for something that we could show off about but rather something that we would love. To us, the design strikes exactly the right balance. 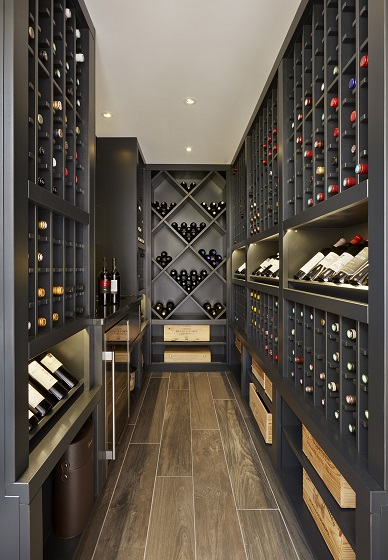 Now that the wine room is up and running, there’s very little maintenance involved. Westbury installed a clever fan system that ensures that the room stays cool in the summer months and doesn’t get too cold in the winter. A sealed door ensures the temperature remains consistent but also means the room hardly even gets dusty.

It was a pretty quick process. We started the work in Oct/Nov of 2014, and the orangery structure was up by December 2015! There was a delay in completion because we wanted a walnut door for the wine room, so that meant a brief pause in work, but that was our decision – not Westbury’s. In the end everything was totally finished by March/April 2016.

In terms of the build itself, I have never seen a team of builders work so quickly…. I will never forget how they ran from the orangery where they were digging out the foundations to the skip at the front of the house with wheelbarrows full of earth and stones. The building team are also unbelievably nice and incredibly friendly. We very quickly knew them all on first name terms. They were brilliant!!!

The new orangery immediately changed the way we used the house. Straight away, we started to use that end of the house much more; it’s such a light room and really brings the garden into the property itself. It’s also a great space to entertain in, and also to relax in with the Sunday papers because of the light. 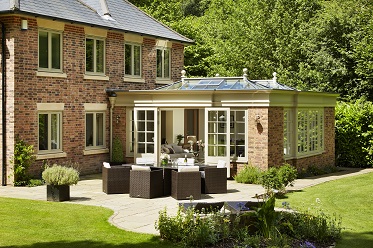 We were so happy with the process and results that we subsequently commissioned Westbury for a second build, which in hindsight has completely changed the layout of the house inside. We never once considered approaching anyone else for this work. After the success of the first build, it was a foregone conclusion that we would ask Westbury to help with this second phase.

This time the brief was to create a larger study area. I run my own business from home and my husband works increasingly from home so we needed a decent study to make the house work for us. We only had the imagination to think about a straightforward extension on the house. But yet again, Jonathan’s advice and suggestions were invaluable; once more he helped us to think outside the box and although it meant a radical change to the house rather than a straightforward add on, it really did work out better.

So, instead of a simple extension, we decided to turn the old kitchen at the front of the house into two separate studies. The kitchen moved from the front to the back of the house and we knocked through from the living room to the study to create one very large living and kitchen space. A new pantry was also added onto the side of the property really changing the way we used the kitchen area. This became an integral part of the build in the same way that the wine room had done previously. Since the living space was now focused much more on the rear of the property, Jonathan also suggested turning the staircase round. He advised that this would improve the aesthetics and ensure that the pathway through the house had a natural flow. He was right! Lastly, Westbury suggested changes to the windows and doors both at the front and back of the house to further improve the aesthetics.

Work started in July 2016 and took five months from start to finish. Once again, as with the initial build, the whole Westbury team was superb. From start to finish the process was incredibly smooth and Westbury ensured that there was minimal disruption to us as a family. They worked on the rear of the property ensuring we had a new kitchen in place before moving on to the front of the property and removing the old kitchen. They also did what they could to minimise dust, securely sealing the area off as much as they could. In fact, we went off on holiday for a week during the process and I’ll never forget coming back to a house that had clearly been hoovered and mopped for us by the building team to remove traces of dust for our return. Westbury definitely go above and beyond in this respect.

Having these new study spaces as dedicated work areas has been incredibly beneficial for the whole family. Not only have they made it easier for me to run my business, they’re also ideal for the children to do their homework in, further improving the way we use the house as a family. And the new kitchen, pantry and living space at the rear of the house has transformed the way we live. It has created a truly exceptional open plan living space, ideal for us as a family but also a wonderful space to entertain friends and family in. We absolutely love it! Weekends somehow seem so much more relaxing now!

Right back in the beginning, in the research stage of our first project, Westbury was the second company we looked at. We set up a meeting with Jonathan at Westbury as well as one other supplier but, after our first meeting with Jonathan, we cancelled our meeting with the other supplier as we believed Westbury could deliver everything we wanted. We loved their honesty and ideas and were completely convinced by the standard and quality of their work. After choosing them, we actually visited the factory and were so impressed by what we saw there we were even more convinced we had made the right choice.

Looking back now, after the completion of two building projects with Westbury, I just can’t fault the experience in any way. Without doubt, we made the right decision selecting them. The service we received from everyone, from Jonathan and master builder, Andy, to the designers, builders and office support team, was fantastic. The whole experience was truly outstanding. Jonathan feels like a friend in many ways now… he was even kind enough to invite us to his home so that we could see some ideas for our kitchen. Andy oversees all the work on site and is the nicest guy you could possibly meet and unbelievably good at what he does.…. honestly, it was such a great experience, I can’t recommend them enough.